Editor’s Note: I had the privilege of conducting an interview with Christian singer TaRanda Greene. She has an amazing testimony! TaRanda is a solo artist and part of the group Cana’s Voice. Group Members are Jody McBrayer, TaRanda Greene and Doug Anderson. I hope you are inspired by TaRanda’s story as much as I was. Here is a little background before we dive into the interview:

She pursued her music career dreams, and God led her to her husband. They toured together and were blessed with two beautiful daughters. When her husband had a failing kidney, she donated hers. Tragically, he still passed away.

Looking through your bio on your website, I noticed that you gave up college to purse your dream of a music career. Did you feel God leading you through that decision?

I did. I had an offer for a scholarship but I couldn’t get it together to take it. I kept praying and calling anyone I knew to help me with my dream, and it really is just a God moment that led me to The Greenes. As I look back, I see His hand guiding the whole thing.

Did you and Tony always want to tour together?

No. We were married, so some days, we didn’t even want to live in the same house, haha. But seriously, as time went on, Tony fulfilled a lifelong dream of owning his own funeral home and I became a stay at home mom, while doing background vocals in the studio when I could and touring. We stayed busy on and off the road, but our first dream was the calling we felt God had placed on us. We were honored to be able to tour and watch Him work.

What was it like being on the road with two young daughters?

Oh man, we had to delay more than one concert when they were babies so I could do a quick clothes change. It’s all the real world you can handle in front of people you haven’t met. A circus and a prayer most nights, but eventually we fell into a routine and the girls just knew what to do. They loved their lives. They knew no other way, and we couldn’t remember life before they arrived. It was wonderful. 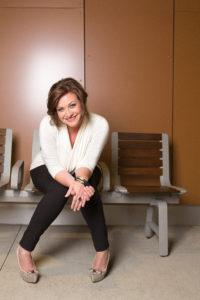 Shortly after Tony and I were married in 2001, we were changing insurance plans and went in for physicals. That’s when they noticed some issues with Tony’s levels and did further testing. He was diagnosed with Nephrotic Syndrome, which is a kidney disorder that causes your body to excrete too much protein in your urine. There was no real explanation. He had two kidneys, but only one that functioned…and the one functioning kidney was failing. So, the typical hospital visits and tests followed every few months until 2008 when Tony began peritoneal dialysis. He did his treatments on tour as well as at home. In August of 2009, he developed an infection in his peritoneal cavity and had to get the treatment tubing removed and began hemodialysis. Again, scheduling clinics in the cities where our tour dates were to do his treatments and at our local clinic in North Carolina were an added element to our schedule. That’s when I was tested to donate a kidney to him. We were a perfect match and I had the transplant surgery in late August 2009.  In August of 2010, almost a year to the day of the transplant, we were in Texas and he basically collapsed off the side of the stage. We went by ambulance to the local hospital where they told Tony he had something infecting his lungs. We stayed in that Texas hospital for a week, and then went right back on the road. It was one month later that Tony checked himself into the North Carolina hospital where his regular doctors were, and six days later he passed away. At the time he checked himself into the hospital, the kidney was working great but his lungs were not. Even a year after his death, hospital investigators were no closer to finding an answer as to what the infection was in his lungs. It was only because of his mandatory suppressed immune system (so his body wouldn’t reject the donated kidney) he was unable to fight the lung infection.

How soon after you donated your kidney did you know it wasn’t going to work? I can’t imagine how devastating that would be.

We had no doubt the kidney would work. Our faith in the outcome of that particular surgery was unwavering. God had provided a way and He would make it work. As I explained in the last question, even until he entered the hospital the last time, the kidney wasn’t the issue. There were moments in that last year of his life that medicines had to be adjusted and so on, but it was explained to us by his doctors that it was completely normal and wouldn’t be a perfect balance of levels for about a year because of his body adjusting to a ‘foreign object’ inside. I knew it wasn’t my fault for the illness, but I did struggle immensely with anger. I couldn’t figure out why we would go through such a life risking process (for us both) for him to die a year later. I don’t have the answer to that yet, but God has dealt with me over my anger issues.

Did you feel a lot of uncertainty about continuing with music?

I felt uncertainty about everything in life. My ability to parent, my ability to sing alone, my ability to make a living for my family, my ability to trust God again with my heart. There was nothing certain in my life after Tony died except I knew there was a God and He must be angry with me. I took all of this very personally. So, I questioned whether I would ever sing again.

How did you start feeling better after Tony passed, without drugs? How did God play a role?

To be honest, it took some time. I was so angry with Tony’s passing that I stopped living in the present. I stopped trying. I couldn’t find a peaceful place in my life, including my precious children. It’s like I stepped out of life for a while. Nothing was the same. I was diagnosed psychotic OCD, severely depressed with four medications a day just for me to get out of bed and participate at all. But God, as loving as He is, didn’t let me go. He kept pursuing me. He was and is faithful to me even when I wasn’t to Him. He’s just that loving. A relentlessly praying mother and loving family pushed me back to God, pushed me to convening our fellowship. And pushed me back to life. God reminded me of a lyric in a hymn my momma taught me when I was a kid. One day as I was praying, and very tired of life, I told the Lord I knew I wasn’t being who He created me to be and living the life He created me to live. I told Him I needed help.

And He reminded me, ‘Great is thy faithfulness, O God my Father; there is no shadow of turning with thee; thou changest not, thy compassions they fail not;’

and as I sang that lyric in my head God began to change me from the inside out. I made a vow to Him that day to do my best to become who He created me to be and to keep breathing and keep moving through the disaster I had created of my life. He redeemed me and restored me. Today, I’m depression medication free and have never been more grateful to be alive and living in the present. Isn’t it just like God to speak to a singer through a song? The journey’s been very long and very difficult, but He is so faithful. I feel a little nudge now and then from some other world letting me know I’m not alone. He’s got me and He’s not letting me go.

How did you get involved with StowTown Records?

I’ve known Ernie Haase for many years and he talked to me when Tony was in the hospital, not knowing what was happening at the time. None of us did. But I was able to talk to Tony about the conversation Ernie and I had then, so that’s very special to me.  A couple of years after Tony died, I began the recording process and the first person I thought to talk to about signing the record was Ernie. Just another God thing we didn’t know was happening, but when we look back, we see His hand. I’m honored to be a part of such a loving label. These people believed in me long before they knew they’d need to. And now, we’re family.

What other prayers has God answered for you?

Where do I start? Every single day is an answered prayer. I certainly have done nothing to deserve to live the amazing life I’m living, but God. I now have four beautiful, healthy children, a loving, devoted husband and an extended family who continues to support and love me. Oh! And I found a great sale on a fantastic jacket last week in Europe. I’m convinced God even does those things. Haha.

What have all of your trials taught you about God’s love for you?

Keep moving. Keep breathing. There is a purpose for you in life. Go find it. 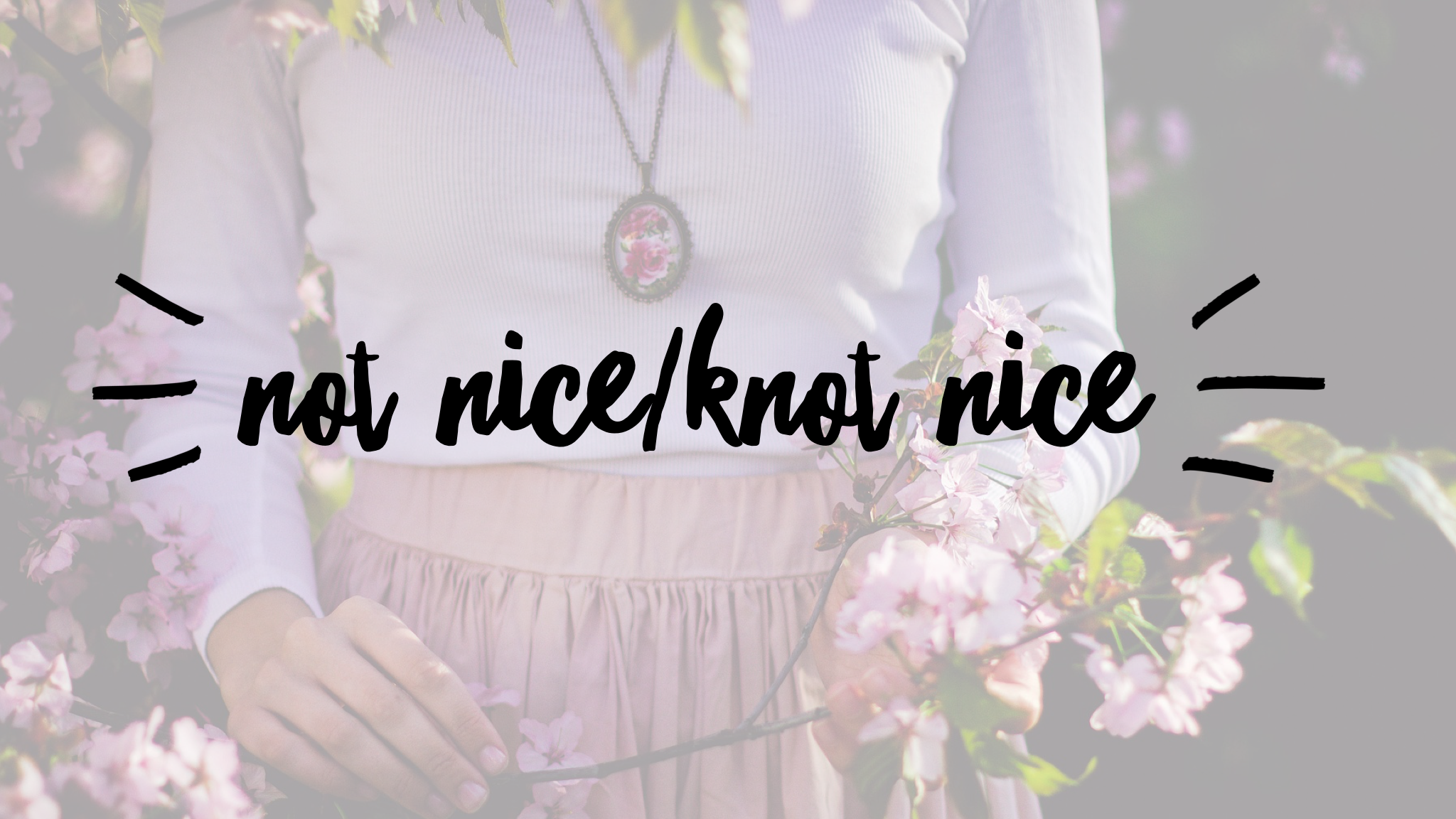 Not Nice or Knot Nice