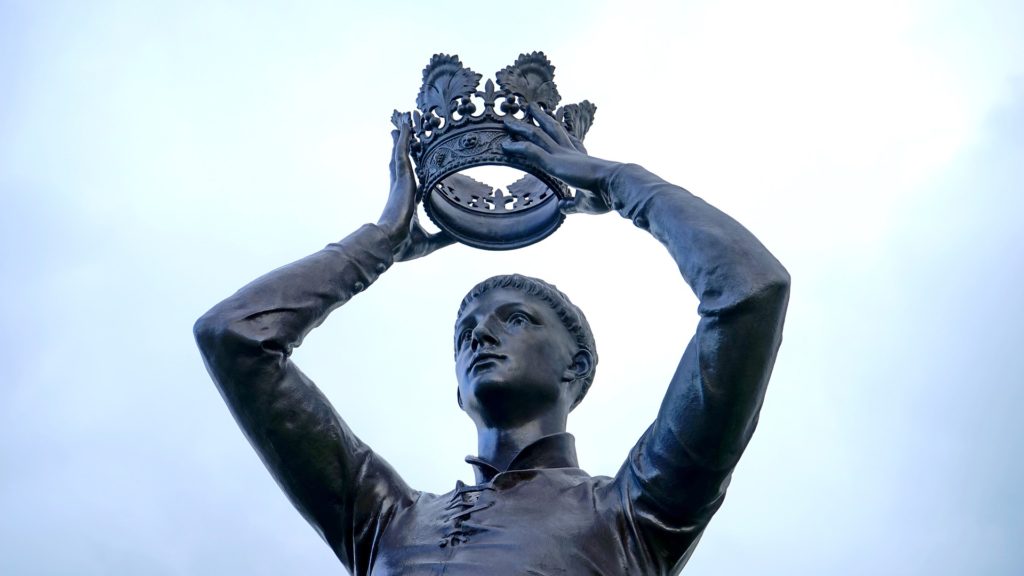 [Editor’s Note: This post includes selections from Holy Shakespeare! 101 lines or passages from William Shakespeare’s works paired with Scripture passages that appear in the bard’s classics by Maisie Sparks. I received a copy from the publisher so that I could review and pick out a few of my favorites. It was a treat for a Shakespeare fan like me! I’ve included the author’s introduction, as well. Enjoy, Divas!]

Four hundred years after his death, William Shakespeare is still considered the greatest playwright of all time. Could that be because he knew intimately the Greatest Book of all the ages? His plays, poems, and sonnets are filled with scriptural allusions and biblical imagery that, if you’re not discerning, might slip right by you.
For years they certainly passed me by. Not until recently did I see the similarities between Shakespeare’s writings and the Holy Writ. I might have received a much better grade in my English Lit class had I only noticed that his works referenced many of the Bible stories and teachings that I was learning in Sunday school.
Unlike me, however, Shakespeare’s sixteenth-century audiences understood the biblical allusions that the Great Bard made, for he lived in what’s been called a biblical culture and era. People grew up learning to read by reading the Bible. Shoppers on the London Bridge might stop to listen to traveling actors who were performing a play based on a Bible story. Churches used dramatizations extensively to teach and enact the Word of God. Along with writing out the alphabet, schoolchildren might print a verse or two from the Geneva Bible—the version that you’ll read on these pages. Contemporaries of Shakespeare felt right at home with the Bible, as it was a staple read in homes. With Scripture permeating the culture, it’s easy to see how holy sentiments appeared on paper when Shakespeare sat down to write.
What’s been fascinating to me in rereading Shakespeare is how copious his use of Scripture is this time around. The Bible is right there… hidden in plain sight. Many lovers of Shakespeare have known this fact for centuries, but over the years the study of both Shakespeare and the Bible has waned in homes, schools, and churches.
That’s why I’ve written Holy Shakespeare! It’s intended to awaken your curiosity for more of Shakespeare’s timeless works and, at the same time, the Great Creator’s Eternal Word. Holy Shakespeare! is not an exhaustive listing of every reference to Scripture that Shakespeare ever made; it’s an invitation to taste and see how masterfully creative he was at weaving the Word seamlessly into his works. I’ve paired lines from Shakespeare with passages from the Bible and interspersed some facts about Shakespeare for you to reflect on as you read the pairings. It’s my desire that reading Holy Shakespeare! will instill in you a greater appreciation of Shakespeare and a heightened awareness of God’s Word as reflected in his works.
So, turn the page, savor Shakespeare anew, and reflect on God’s Word. Along the way, I pray that you will gain strength in the recognition of its enduring power.

Though some of you, with Pilate, wash your hands,
Shewing an outward pitie: yet you Pilates
Have here deliver’d me to my sowre crosse,
And Water cannot wash away your sinne.
KING RICHARD II, ACT IV, SCENE 1

When Pilate saw that he availed nothing, but that more tumult was made, he took water and washed his hands before the multitude, saying, I am innocent of the blood of this just man: look you to it.
MATTHEW 27:24

I am no great Nebuchadnezzar, Sir; I have not much skill in grass.
ALL’S WELL THAT ENDS WELL, ACT III, SCENE 2

The very same hour was this thing fulfilled upon Nebuchadnezzar, and he was driven from men, and did eat grass as the oxen, and his body was wet with the dew of heaven, till his hairs were grown as eagles’ feathers, and his nails like birds’ claws.
DANIEL 4:33

O Grandsire, Grandsire: even with all my heart
Would I were Dead so you did Live againe.
TITUS ANDRONICUS, ACT V, SCENE 3

…learn to jest in good time; there’s a time for all things.
THE COMEDY OF ERRORS, ACT II, SCENE 2

For thus said the Lord God, the Holy One of Israel, In rest and quietness shall ye be saved: in quietness and in confidence shall be your strength, but ye would not.
ISAIAH 30:15

Churches Around the World: Zagreb, Croatia

Learning to Pray Together